“When I was your age, we had to walk to school uphill both ways…”
– Every Older Person There Ever Was

Yesterday I ran a route that I’ve been wanting to run ever since I started running.  There hasn’t been much of a reason why I haven’t done it yet.  At first, I wasn’t ready for it (physically or mentally); then I wanted to wait for a special occasion on the calendar (all of which came and went); then it was Winter, etc. etc. etc.  Not sure why I put it off as long as I did.  But yesterday, without even any true destination in mind, I put my running clothes on, hopped in the car, and just drove.  I ended up here:

This is the house that is still standing in the Potato Creek community in Virginia, where my grandpa was born and raised.  He passed away in February of last year.

He wasn’t much of a talker when he was with us.  Very quiet – filled with secrets.  But my grandmother filled in the gaps.  Through her, I’ve heard about the house he grew up in and have learned about the hilly path he had to walk on to school and back and everyday.  I’ve driven this path many times, but ever since I became a runner, I have always wanted to run it.  It’s not that far to me now (a little more than four miles), but when I first started running, I knew I wasn’t ready for that distance.  And distance wasn’t really the issue anyway.  Holy crap, is that thing hilly!  But I kept telling myself that one day I would be ready to run it.  Turns out, yesterday was the day.

This may have been one of my favorite runs ever.  It may sound crazy, but a part of me felt like my Pa-Paw was actually running with me.  I’m not sure he cared for the Kelly Clarkson, Pink, and Cee Lo Green that was busting out of my headphones, but nonetheless, I think he kept up.  In fact, I think he probably passed me a few times.  Especially on those dang hills!  Did I mention there were hills?  (From now on, when an older person tells me they walked uphill to school both ways, I’m not questioning that statement. I just found out for myself!)

The old school that he went to is no longer standing.  From what I understand, it burned down years ago (long after it was no longer used as a school and was just being used as a barn for local farmland).  After the run, I went and looked at the area a little and this was the only remnants of the school that I found: 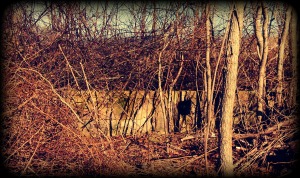 Here’s a view of the whole area where the school stood: 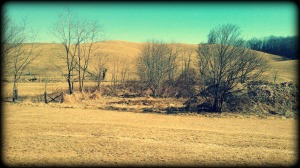 And still standing (and still in operation on occasion) just beside the old school land is the church that he attended – Potato Creek Church.  Such a beautiful old place that holds many many memories, I’m sure.

And since I’m sharing pictures, I have to share one last one.  Now, I can’t remember – did I mention that this run was hilly?  HOLY COW, it was hilly.  And at one point, I kid you not, I saw something painted on the road that cracked me up.  I’m convinced that someone else before me tried to run this thing and happened to be carrying a can of spray paint along with them on thier run:

I feel ya, fellow runner.  That’s exactly how I felt too!

So, anyway, this blog is not going to be like most of my others.  I usually try to wrap up with some type of life lesson that I’ve learned from some experience.  But nope.  Not this time.  I just wanted to tell you about a run with my grandpa that I finally took the time to do.  A run where I cleared my mind, appreciated the scenery, traveled back in time in my mind to try to experience what it had been like for my ancestors before me.  You know – just took a break from everything else and appreciated who I was and where I came from.

Hmmm.  Maybe there’s a life lesson to be learned in this after all.

Thanks for the run, Pa-Paw.