“It was not enough to come and listen to a great sermon or message every Sunday morning and be confined to those four walls and those four corners. You had to get out and do something.”
– John Lewis

It is Sunday morning, and I am not in church.

Now, this is no different from most Sundays for the past few years, mind you. But as the granddaughter of a devout Southern Baptist Christian, there’s not a Sunday morning that dawns without that old ingrained guilt in my soul for not having my buns firmly planted on a pew where they belong.  However, Guilt and me have gotten a bit used to each other.  I don’t let him talk me into things as often as I did when I was younger.

So, no church for me.

I have a ton of excuses, but not really any that would impress Grandma. I mean, my life pretty much revolves around ample Sunday morning churchgoing opportunities. The aforesaid Grandma, for instance. I know where she’ll be, without fail, and would love to have me join her. And I do sometimes, don’t get me wrong. But that’s not for the church itself – that’s to see and spend time with her. She lives a good 45 miles away, though, so it’s not the most convenient scenario for every Sunday morning.

You know what’s not 45 miles away though? The church at the end of my driveway. Yes, my house literally sits in the backyard of a small Methodist church that my mother-in-law attends. But have I ever been in there?  Nope.

(Okay, that’s a lie and you’re not supposed to lie on Sundays. One time I went in and peeked around when no one else was there. But I’m thinking that might not count.)

Another nail in my Sunday morning heathen coffin? My husband actually works at a local church on Sunday mornings. Yep.  As he gets up early and heads to town to get the rented venue open and rev up the sound equipment for the upcoming hip, contemporary, and even entertaining church service, I sleepily wave goodbye to him and snuggle deeper into the covers.

So, with all these opportunities staring me in the face – why don’t I go?  Oh, I don’t know. I’m not an atheist. (Although some have mistaken me for one lately and that’s okay. I’m not offended.) But I’m also not really a believer either. At least not in that book written by a bunch of men who were as flawed as I am.

But let’s not get into that.  That’s not what this story is about. My faith, or lack thereof, could fill a novel and you don’t want to read that and I don’t want to spend time talking about it either. So to save us both a word-induced nap, we’re going to skip that subject and I’m going to try to get to my point.

Alright. As we’ve established, I was, again, practicing my newfound heathenism this morning and not attending church.  What was I doing instead? Running.  I find myself doing that a lot on Sunday mornings lately. Whether there’s some deep sense of spiritual guilt that drives me out the door on these mornings in order to more quickly pass those previous pew-allotted hours, or I’m just making use of the rare few moments of alone time with no responsibilities, I’m not sure. Either way though, my running shoes see a lot of Sunday morning asphalt.

Today being no exception, I laced up my shoes and headed out the door to beat the forecasted midday heat. And what do I run into?

Yes, seeing as how I’m in their backyard, it’s inevitable to go for a run and not pass the church. But I usually try to time these Sunday morning excursions so that I don’t have to face the good people of the world as they exit their cars and head into the sanctuary where my darkened heart “belongs.” My mind supplies enough ingrained guilt without those angelic pairs of eyes adding to the heap. But alas, this morning something went wrong and I blew it. I wasn’t watching the clock and I messed up.

So, I steeled myself. I put on my “armor” (aka headphones) and prepared to rush right by them without a glance in their direction. They were not going to make me feel guilty on this particular morning, no sir. I’m a grown up and I can do what I want. I can certainly run fast enough in my running shoes to get away from them in their Sunday best if they try to catch me, right?

I increase my speed, prepare to zip right by, and then…..one of them speaks to me.

I mean, come on lady. I’m running here. I have my armor in my ears – can’t you see? I’m dressed in way-too-short-for-my-age running shorts and a tank top; I’m obviously not rushing down here to beat the church bell.  Surely to gosh you’re not going to invite me in there looking like this, are you?

She mumbles something and I reluctantly remove my headphones.

“I’m sorry, what?” I call out, slowing my pace but not fully stopping – acting like I want to hear her reply, but making it obvious that I have no time for chitchat and that my hell-bound soul has already made its decision to run this morning and she was absolutely not going to change that.

“Just wanted to make sure you saw this!” she calls out cheerily and points to the wooden box in the corner of the parking lot.  To my surprise, she was showing me a water stand.

Now, I’d seen this water stand before. And I appreciated it for its uniqueness and the kind hearts that must have erected it. We are a beautiful mountain county and many bicyclists make their way through our secluded area on their weekend treks, so a wooden water stand had been built and placed at the corner of the church parking lot with a drawing of a bicycle and the letters “H20” painted on its side to make the bikers aware that there was refreshment waiting for them. So, it wasn’t a surprise to see it – I live here and I’ve seen it many times.

But I sure was surprised to have it offered to me.

“If you get thirsty during your run, make sure you get some water!” she called out, and smiled and waved as she made her way into her house of worship.

I couldn’t help but grin.

What a gesture. Not only was she not there to make me feel guilty about not attending church services, but was actually offering to help me in the activity I chose to do instead of accompanying her into her sanctuary.

With a smile plastered on my face, I called out a thank you to her retreating back, and continued on my journey.

So, no. I didn’t go to church today. I didn’t go last Sunday and, frankly, I probably won’t go next Sunday. But that doesn’t mean I didn’t commune with my own personal version of the God that exists in my life.

God was everywhere this Sunday morning.

My lungs breathed her air. My eyes beheld her beauty in the cloudless sky above me and the mountains that surrounded me. My feet caressed her earth as they padded across six miles of terrain.

And then, in the midst of it all, she not only acknowledged my unique form of worship, but she took the time to speak back to me.

She stepped outside and offered me a drink of water.

“There is no need for temples, no need for complicated philosophies. My brain and my heart are my temples; my philosophy is kindness.”
– Dalai Lama 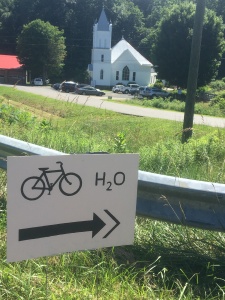