“The important thing is that men should have a purpose in life. It should be something useful, something good.”
– Dalai Lama

I visited my grandmother in the nursing home over the weekend.  She has Alzheimer’s Disease and is, unfortunately, in the later stages.  Meaning, she has no idea who any of us are.  And while this is still heartbreaking, most of us in the family have gotten used to it.  We know what’s coming when we visit her.  We’re ready for it, and we expect it.  We’ve learned to live with it.

Unfortunately, however, she hasn’t.

One thing she kept repeating over and over again during our visit was this one same question, “What am I supposed to be doing?”

Each time she asked the question (not remembering she had just asked it seconds earlier), I would respond the same way, “You’re not supposed to be doing anything, MawMaw. Nothing at all.” And each time, she’d say, “I’m supposed to just sit here?”  I’d tell her yes, and then the cycle would repeat itself.

And then, in addition to her question, I started noticing other things around the room that seemed connected to what she was getting at.

Now, we weren’t visiting in my MawMaw’s private room.  When we arrived at the nursing home, she had been moved to the ‘day room’ for activities with the other residents (which she didn’t seem to want to participate in).  So, while visiting her, we also saw a lot of the other patients.  And while there were a variety of levels of illness (as well as a wide variety of personalities), one common theme seemed to stand out at me.  The theme that my sweet grandmother was trying to convey with that one question she kept asking me.

The search for purpose.

Take one lady for instance.  She kept pushing her little wheelchair around firmly explaining to people that they were not allowed to go certain places.  In fact, she’d block their path if they tried.  (Which in one case resulted in a kick to the leg of the other person in his wheelchair as he was simply trying to go through the doorway. Yikes!)  While little Miss Bossy Pants was an annoyance to all concerned, I started to realize that she was just appointing herself with a purpose.  A misconstrued purpose, maybe, but a purpose nonetheless.  Her job was to tell people where to go and not to go.

And this same lady at one point (when everyone was apparently in their appointed places and she had allowed herself a break from guard duty), rolled herself over to a hamper near the door and, with curiosity, opened the lid and peered in.  What she saw was a mound of dirty, used towels.  So, what does she do?  One by one (until the nurse caught and stopped her), she pulled them out, placed them neatly into her lap, and started folding them and putting them back into the hamper.

She had found a purpose. Folding laundry.

Another woman sat at her table and made bread. No, she didn’t have any flour or shortening or bowls or an oven or any of that. Not that you or I could see, anyway.  But nevertheless, she sat at her table and mixed and kneaded the dough, placed it on the table, patted it out, etc. It took me a while to figure out what she was doing, but once I did, that same thing hit me again.  She had found her purpose.  She had to bake biscuits.  And she was content in doing so.

In every person lay the same idea.  One woman chose to sing, another chose to yell at her kids (who weren’t there)…the list goes on and on.  What looks to those of us in our “right” minds as unnecessary chatter and activities, to them are anything but unnecessary.  They are, in fact, very necessary.  To their livelihood.  To their well-being.

To their sense of purpose.

Which brings me back to my MawMaw.  While sitting there, I was reminded of a quote I once heard.  I couldn’t remember it exactly, but when I got home, I looked it up.

“I am here for a purpose and that purpose is to grow into a mountain, not to shrink to a grain of sand. Henceforth will I apply ALL my efforts to become the highest mountain of all and I will strain my potential until it cries for mercy.”
– Og Mandino

We have a purpose.

I turned to my sweet grandmother, with all of this on my mind, and I finally had an answer for her.  The next time she asked me, “What am I supposed to be doing?,” I had her answer.

“MawMaw.  All you have to do is just let us love you.” 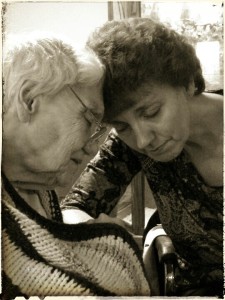 I know that wasn’t enough for her.  And I know she won’t remember my answer for any length of time.  But regardless of whether it seeps into her aging mind on some level, it still remains true.  No, there are no more children to take care of.  No more laundry to fold.  No more dinners to cook or beds to make or groceries to be shopped for.  My MawMaw is right – there is nothing left that she is supposed to ‘do.’  It is time for her, whether she wants to or not, to simply rest.  That’s all.  Just rest.  And to a woman who spent her life as a wife, mother of nine, step-mother to many others, and grandmother and great-grandmother to too many to count, I’m sure that’s a tough blow to take.  But whether she realizes it or not, although there are no physical activities left for her to take care of, her purpose still remains strong and true.

She’s still here because she still has a lesson to teach us.

She may not realize that, but I do.

Thank you, MawMaw.  Because you are serving your purpose, I’ll now go on to serve mine.

(And I’ll try to remember to appreciate every moment of it….)

“As far as we can discern, the sole purpose of human existence is to kindle a light in the darkness of mere being.”
– Carl Jung