“We fear things in proportion to our ignorance of them.”
–  Christian Nestell Bovee

I want to tell you a story about a dog.

And it’s not just any dog, mind you.  I’d like you to meet my boyfriend Richard’s sweet little german shepherd, Lucy.  Isn’t she the cutest little booger?  So incredibly sweet.  So lovable.  So happy.  And so…*ahhem*…um, how shall I say this?…unintelligent?  Heh.  Bless her sweet little heart, she’s not exactly the brightest bulb in the box.  But she sure makes up for it in sweetness though, that’s for sure.  Well, I have a story about one of Lucy’s recent…let’s just say mental lapses…that I thought was pretty interesting.

Now Lucy is a little over a year old and, all her life, has been taught that she is NOT to come in the house.  She’s an outside dog, and that’s always been perfectly fine with her.  Well….now here we are faced with this awful winter we’ve been having, so we decided to try to bend the rules a little.  With sub-zero temps and wind chills to boot, it was time to let Lucy in the house.

Richard, being the sweetheart that he is, decided that he couldn’t bear knowing that all she was going to have as shelter would be a drafty garage.  Yes, it would block the worst of the wind, but it still wasn’t all that toasty in there.  So, he rigged up a little space heater for her right next to her dog bed.  That way, she would at least feel the heat from it as long as she stayed in her bed for the night.  Problem solved.  We’re going on a few months of this space heater warmth for Lucy on these cold winter nights and all has been working just fine, thank you.

Until yesterday, that is.

I left early in the morning for work and Richard was close behind.   We both had very long days yesterday, consisting of real estate work here and there and followed up by rehearsal (for me) and sound work (for him) at the theatre until late in the evening.  And then, after topping the night off with a quick bite to eat and a glass of wine or two at our favorite restaurant, we finally made our way back home.  And what did we find when we got there?

Lucy.  In the garage.

And by “stuck,” let me explain.  This space heater that I described to you is a long, low-to-the-ground type.  It resembles a baseboard heater somewhat.  Before Richard had left for the day, he went into the garage through the open door (on the opposite side of the heater) and Lucy had followed him in.  As he was leaving, he shut the garage door behind him with Lucy still inside, knowing that it was ok to do so since Lucy could easily go out the side door that we always keep open for her.  Well, what he didn’t realize, was that the heater (which was not on, by the way) had been pushed to the side just slightly and was now…um…”blocking” Lucy’s path to the side door.

It took us a minute to realize what the problem was once we got home.  I was the first to arrive and was shocked that Lucy didn’t come flying to me with her tail flapping as she always does.  I heard her whining in the garage, but she wouldn’t come to me.  I walked a little further in and saw that she was just standing there.  That’s it.  Just standing there looking at me.  (And crying, the poor little thing.)

That’s when I realized that she was refusing to step across the little heater.  I walked over and simply pushed the heater a few inches to the side, and let me tell you – you would not believe the happiness that burst forth from that sweet little dog.  She bolted out of that garage, went straight to the yard to ‘take care of some overdue business,’ and then came bounding back to me for her “Hello, I’m glad you’re home, I love you, I love you, I love you” kisses.

When Richard got home, we laughed about that silly dog being “stuck” in the garage, all because she refused to step across the heater.  But then the more we talked about it, the more we realized that, although the heater wasn’t hot at the moment, Lucy must have learned (the hard way, I’m guessing) that that heater could be hot.  So, she figured it was best to play it safe.  Even if it meant imprisonment.

Now, you guys realize I’m a writer right?  And one thing I’ve noticed about we writers…we simply cannot see a situation in only a literal sense.  Oh no – there is always a deeper meaning to just about everything.  This time was no exception.

I thought about poor sweet Lucy and wondered how many times I’ve done that myself.  How many times have I chosen imprisonment and sacrificed my freedom, simply because I was afraid to attempt something that may have hurt me in the past?  And how many times was that thing that I thought was going to hurt me, simply just there for my benefit and not going to hurt me at all?  And how many times have I, due to being ignorant to the harmlessness of the obstacle (simply because I was not willing to test it out), therefore remained in the tiny, lonely, confined space of my own making?

And while we’re on the subject – how many times have you done that?

So, yes, maybe this was just one instance of a not-so-smart doggy getting stuck in a garage behind a heater.  Or…

Maybe this was one of those lessons that life puts in front of you all of the time…if you’ll just take a moment to stop and notice it.

I don’t know about you, but I sure do know that Lucy was pretty darn happy to be free.  Maybe you should give freedom a try yourself. 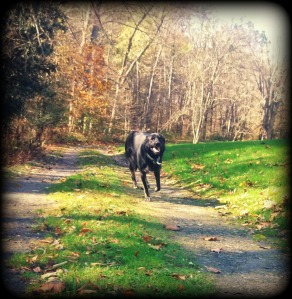 “Ultimately we know deeply that the other side of every fear is freedom.”
– Marilyn Ferguson