“Embarrassment is a villain to be crushed.”
– Robert B. Cialdini

So, have you heard about Stefanie Dolson?

Stefanie, bless her heart, had something happen to her earlier this week that would absolutely mortify most of us.  As a member of the UConn women’s basketball team who had made a trip to the white house to be honored by the President himself for their NCAA national championship, Stefanie had … um … well, let’s just call it a little mishap.  Oh heck, here, let me just let you see for yourself: 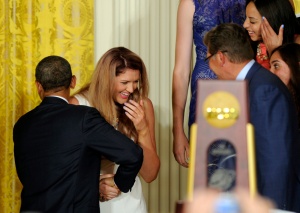 And as if it happening weren’t bad enough…of course, it had to happen on national TV.  And, of course, newscasters everywhere had to run it on their news segments.  And you can see the reporters’ reactions in the lower left corner of the screen in the video – cameras clicking, flashes everywhere, etc.  Whew.  If Stefanie was going to embarrass herself, by golly she was going to do it right.  Get it, girl.

But you want to know my favorite part of this whole ordeal?  The reason why I’m blogging about the incident?  It’s what happens just after the above video clip ends – the part that most video clips I have found on the subject have managed to leave out.  After the initial embarrassment, after the nervous laughter, after being helped up by the friggin President of the United States for Heaven’s sakes, you know what Stefanie did?

She composed herself, looked right out at one of the cameras and…ready for this?…she curtsied.  Yep.  Curtsied. 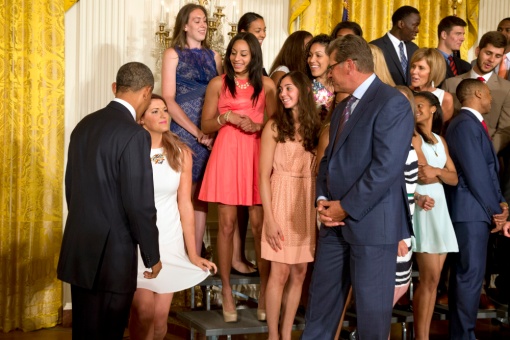 After facing what was probably the most embarrassing thing to have happened to her thus far in her life, she got herself together, looked the embarrassment right in the face, and basically bowed to it.  That curtsy said, “Yep. There ya go. I’m human, and I just proved it. You’re welcome. Carry on.”

It’s pretty safe to say that Stefanie Dolson is one of my favorite people in the world right now.  What a lesson there is to learn from this awesome lady.  I don’t know about you, but I think I’m going to be thinking about that Dolson curtsy for many years to come.  The next time life knocks you down?  Hey, just get right back up, and give life the ol’ Dolson curtsy.  You know?  You can either be remembered for the embarrassment you felt while you were stumbling, or you can be remembered for the classy way you carried yourself after you regained your balance.  It’s that simple.

(And another little secret – you’re actually probably the only one that’s really going to remember anyway. Unless of course you were on national TV… But isn’t what you remember about yourself the most important thing anyway?)

Remember the curtsy, people – not the stumble.

“Relax; the world’s not watching that closely. It’s too busy contemplating itself in the mirror.”
– Richelle E. Goodrich