“People killin’, people dyin’
Children hurt and you hear them cryin’
Can you practice what you preach
And would you turn the other cheek
Father, Father, Father help us
Send us some guidance from above
‘Cause people got me, got me questionin’
Where is the love?”
– lyrics from Where Is The Love? by The Black Eyed Peas

Let me tell ya what I’m tired of. People. Yep, that’s it. People.

I have this bad habit of commenting on controversial issues on Facebook. I know, I know. Generally, I’m quiet as a church mouse and keep my opinions to myself [Disclaimer: This is a total lie.], but occasionally I’m known to spout off my opinion here and there. And when I do that, there seems to always be someone somewhere who has the exact opposite opinion from me who comments soon thereafter. And no matter how hard I to try to make this happen:

…most of the time (okay, every time) it just doesn’t work.

I’m sure most of you have seen or heard something about what happened with this girl in South Carolina this week. (Click here if you haven’t.) Now, I’m well aware that the media can skew stories, and none of us really know what happened that led up to this incident unless we were actually there, but there is a VIDEO (see link above) that we can watch showing what happened during the incident. Now, regardless of the surrounding story, I’d say that without any knowledge of what happened prior to or after this event, we should all be able to watch this video and see that what happened to this student was wrong.

Once again, I expect the world to see things the way I do, and once again I’m surprised when they don’t. (In fact, my own husband disagrees with me on this one…which I’m not sure has ever happened with us before regarding a current events issue.) How two people can look at an incident and see completely different things still never ceases to amaze me.

Here’s what I saw.  “Officer Slam” (hey, I’m not calling him that to skew this story to my line of thinking – that’s what the guy is known as around the school) is called in to a classroom to remove a girl who refused to leave the classroom when told to. Why was she told to leave the classroom?  Well, the media says she was asked to leave because she refused to put her cellphone away. But really, does it matter? The teacher decided she did something that was so wrong that it warranted her removal from the classroom.  The student disagreed and remained in her seat, refusing to leave.

Now, let’s stop here for a second. Was she wrong not to get up and leave?  Sure she was. She was told to do something and she didn’t do it. A teenage girl refusing to do what she was told?  WOW!  Now, there’s a news story. That never happens. Those South Carolina teen girls must be different than the teen girls everywhere else because the others are never belligerent. Never refuse authority. Never think they are being treated unfairly or feel like they know better than the adults around them. Am I right?

Let’s break here again. Okay, now we have an officer telling her to leave. Again, this teenager does something that’s absolutely unheard of – she remains stubborn. She stands her ground and refuses to budge. Was she right to do that? Nope. Was she defying authority? Yep.

Back to the story.

Here’s where the resource officer has to make a choice. And here’s where the division line is drawn between how people see the incident. What should he have done in this situation? There are many theories on that. But here’s what he did do.

He put the child – the CHILD – in a choke hold and slammed her to the ground.  He then threw her body forward to the front of the classroom (breaking her arm in the process, for the record) and pinned her to the ground and put her in handcuffs.

See, here’s what some will tell you.  “By Gawd, if I’d have behaved like that with my teacher or any adult for that matter, my teacher and parents woulda whooped my ass.”

Ahhhhh. The “I’d have gotten my ass whooped for that” defense. That’s my favorite. You know why it’s my favorite?  A few reasons actually.  Number one – it’s a downright lie. Nobody got their “asses whooped” nearly as much as they claimed to. But number two? It falls right there in the category of that other defense I love – “We’ve always done it this way.” Yep, kids used to get paddled in school (hey, I was one of them). And yep, kids used to get the hell beat out of them at home on occasion.  I get it. But you know what? That was then. People were IDIOTS.

You don’t fight fire with fire.

See, there’s this thing called evolution. Whoa now. Simmer down there, right wing Christians, I’m not talking about that evolution. I’m talking about humans evolving. Learning. Growing. Moving forward. Lots of things have changed. We don’t have slavery anymore. Women can vote. You know? Change? Evolvement? Thankfully, that’s what is happening in our world. And this whole beating the hell out of a child when they do wrong is one of those things that we used to do that was WRONG.

It was wrong. It didn’t work.

Let me tell you what happened to me when I was a teenager. I ran my mouth like nobody’s business. I know that’s probably hard to believe, but alas – ’tis true. I gave my mom a run for her money, that’s the truth. And did she beat the hell out of me?  No. Sure, I got spanked when I was little – I’m not talking about that. I’m talking about when I was a full-grown (physically, that is) teenager standing in front of her running my smart mouth. What did she do? She took things away from me. She grounded me. She took away my privileges. I wasn’t allowed to go places, wasn’t allowed to talk on the phone, etc.

But you know what happened? I GREW UP. I became a functional, successful adult. I still run my mouth, but she’s proud of me for it now because I’m usually saying something that others may not have the courage to say. I run my mouth on this blog. I run my mouth in short stories that have been published with Chicken Soup for the Soul. I run my mouth in my own self-published book of essays. I’m currently running my mouth in a novel that I will have published next year.

I run my mouth.

And that’s a good thing.

Because my mom raised me the way she did, I don’t fear running my mouth. Yes, I suffered slight consequences for it at times when I was being disobedient. But she didn’t completely kill my desire to stand up for myself and speak my mind. And now? Now, I’m an adult who is proud to stand up for what she believes is right.

Did my mom do the world a disservice?  Hmmm….I guess that depends on who you ask. But if you’re asking me? Hell no, she didn’t. She made me who I am and I am proud of it. I’m not afraid to be me.

Back to Shakara in South Carolina.

Something the world didn’t know at the time of this incident…something that resource officer probably didn’t know…is this. Shakara just lost her mother and grandmother. No, this doesn’t excuse her actions as some might be quick to point out. But you know what? It explains them.  And see, that’s what happens when you actually take the time to know someone’s story before you immediately jump in there and try to take control.

You can’t fight fire with fire.

Fire needs water. Fire needs soothing. It needs the opposite of what it is to put it out. Adding fire to a flame makes it burn brighter. Makes it do more damage. This young girl in South Carolina was damaged. And now? Now she’s damaged in a much more profound way.

Where is the love, people? Seriously. Where is it?

But hey – what do I know, right? I’m just a loudmouth redhead who didn’t get the hell beat out of her for speaking her mind. So, here I am. Just another opinion among the crowd. But I can tell you one thing – I’m proud of the person my mother raised. And I’m proud of the people I’m raising.

No child of mine is going to be afraid to speak their mind. And I wish I could say the same for all of the children out there. This situation is a shame. A crying shame. Not just what happened – but the fact that so many out there agree with it.

I’m so sorry that Shakara will not know the world that my children know.

“If we desire a society of peace, then we cannot achieve such a society through violence.”
– Bayard Rustin 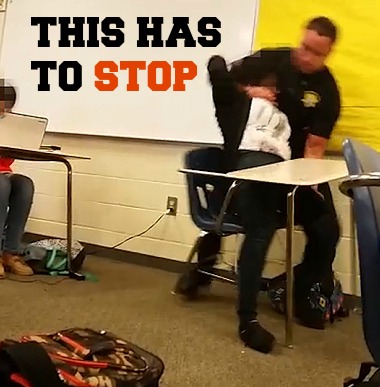