“Actors do tend to get pigeonholed.  People want to know who you are so they can put you in a box.  It’s lovely to be known for such diametrically opposite roles.”
– Tom Hiddleston

I was just sitting here reflecting over last weekend at Oz (read that blog here if you missed it) and something dawned on me.

This has been a year of some awesome roles for me.  (And quite diverse ones, at that!)

I’ve been an actor for a long time, and it just occurred to me that most of my very favorite roles and on-stage moments have happened in 2013. This has been quite a year!

Here are a few examples:

Started the year off as Elvis.  Yep, you read that right.  Elvis. 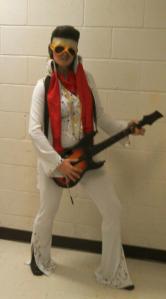 Ok, so I was a country hick trailer park chick dressed up as Elvis for the “Elvis and Jesus: A Tribute to the Kings” nativity scene.  In July.  In Florida.  (Did ya get all that?)  Oh yeah, you have to check this play out if you’ve never heard of it.  Radio T.B.S.  It’s a hoot.  And, incidentally, this was the first time I’ve ever received an ovation mid-show.  My Heartbreak Hotel was apparently awesome.  Or….hilariously bad.  Eh, either way, they clapped.  Booyah.

“Mother” in the show Life With Father. 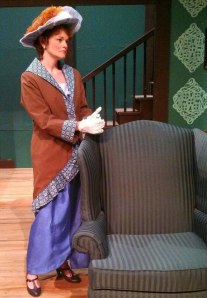 Pretty awesome role.  Even got to do a TV interview for it.  (Read that blog here if you’re interested.)  Yep, very cool stuff.

Then, I got to play a flooz.

You just can’t beat that.  (Gloria Rasputin in Bye, Bye, Birdie.)  Even had to tap dance and do a split.  Well.  Sort of…

And then last weekend, as my regular readers know, I got to be both the Wicked Witch and Glinda, the Good Witch of the North, at the Autumn at Oz festival in Beech Mountain, North Carolina. 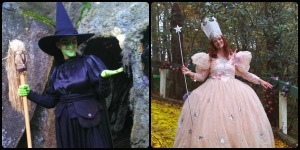 Yep.  As you can see, this has been a year that I have stepped “out of the box” somewhat.  I have been blessed with these varied roles and have enjoyed every minute of becoming someone completely different each and every time I’ve donned a new costume.   And, not to toot my own horn or anything, but I’ve actually enjoyed watching myself blossom as an actress as I’ve stepped into these roles.  I wasn’t so sure I had it in me, but apparently I do.  I’ve been kinda proud of myself.  How about that?

But you know what’s even cooler?  Knowing that at the end of the day, after the costumes are neatly put away and silence drowns out the applause, I get to step into a few even better roles.

This one, for example: 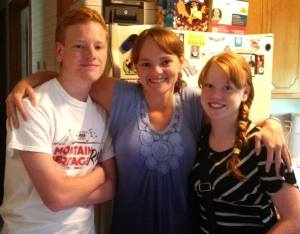 “Of all the roles I’ve played, none has been as fulfilling as being a mother.”
– Annette Funicello

I get to be these awesome teenagers’ mom.  How freakin’ cool is that?  Just like all of the other roles I’ve been blessed with, this is another one that I wasn’t sure I would know how to play.  And sometimes I still falter, sometimes I don’t always follow the script or get my lines right, but all-in-all I think I’ve managed to do a pretty darn good job.  I sure have some awesome little co-stars, that’s for sure.

All it takes is to turn on the radio or the TV and within minutes you are hearing some new horror story about the awful things teenagers are into these days.  Each time this happens, I say a silent little prayer and thank my lucky stars that I have the kids I have.  Now, I’m not saying they’re perfect – far from it – but the problems that we have are just normal, everyday problems.  Nothing drastic and severe like some poor parents have to go through.  I hope my kids know how proud I am of who they are, and who they are becoming.  And I hope the role I’ve played in their lives has had a little something to do with that.  I like to think it does.

Another role I’m pretty blessed with?

Being the one this guy loves.

“If you age with somebody, you go through so many roles – you’re lovers, friends, enemies, colleagues, strangers; you’re brother and sister. That’s what intimacy is, if you’re with your soul mate.”
– Cate Blanchett

My gosh, I sure do love this dude.  We have been through many phases in our relationship – and I think that’s why the above quote speaks to me so much.  We’ve been all of those to each other at some point, and we just keep going strong.

And now I know why.

“I’ve had disappointments and heartbreaks and setbacks and roles I didn’t get, but something always came along that either made me better or was an even better role.”
– Lee Majors

Finally, I get to play the best role I’ve ever played.

It has taken me a long, long time to finally get to enjoy this role.  Took some trial and error, I admit.  But finally, finally, I think I’ve figured out this role pretty well.  And it sure is nice to be allowed to play it.

I think I’m right where I belong.

This is the role I’ve been waiting for.

Are you playing the role you’re meant to play?  Make sure you are.  Life is just too short for anything else.  Trust me.

“To be yourself in a world that is constantly trying to make you something else is the greatest accomplishment.”
– Ralph Waldo Emerson