I have been kind of keeping something a secret.

But, alas, as my ever-helpful boyfriend said to me about my fear of the jinx (while quoting the great philosopher, Andy Griffith):

“There’s no such thing, Barney.”

(Full of wisdom, that one is.) 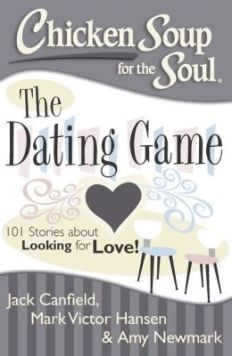 This is the cover of a new Chicken Soup for the Soul book that is being released on December 24.  And guess what?

There’s a very strong chance that one of my stories will be in it.

Ok, let me back up a little and explain.

About four months ago, after starting my blog and getting some pretty positive feedback from people, I decided to try on a little confidence and see how it fit.  I started submitting some of my works.  Mostly, I entered a few little contests here and there (one of which I won!), but then I started looking into submitting works for publishing.  I stumbled across a webpage that listed various publishers and Chicken Soup for the Soul was on the list.  When I saw it, it was like a light bulb went off in my mind.

I had always had trouble deciding how to describe my writing.  My grandmother, who is not techno savvy AT ALL and has thus, of course, never seen my blog (and probably has never even heard of the word ‘blog’), would ask me “Well, Melissa, what is it that you write?”  I was stumped.  I had no idea how to answer that. The things I write certainly don’t fall into the “novel” category (I can barely hold a thought long enough to make a complete sentence, much less maintain a thought for the entire process of writing a NOVEL!  Sheesh!);  they aren’t short stories really (they aren’t long enough for that, and they’re not fiction); they’re not “essays” exactly, but that was what came to closest to describing them I supposed.  But I still couldn’t quite explain to her (or to anyone) what they were exactly.

And then I saw the request for submissions to Chicken Soup and realized that those were exactly what I write.  Just like what the Chicken Soup books are filled to the brim with, I write short little nonfiction personal accounts from my own life that I hope will somehow make a difference to someone else.  As my friend Chris Hansen once said in a Facebook status, “We are more alike than it seems.”  He followed it up with the following quote :

“We are here to awaken from our illusion of separateness.”
– Thích Nhất Hạnh

That was my goal.  I wanted many people from many walks of life – no matter their age, religion, social status, whatever – to look at the stories coming from this one little person floating out here on the planet along with them and think, “Hey! That sounds like me!”

So, I decided to take a chance.  I sent in a submission to Chicken Soup for the Soul.

Now, I know a lot of my blog readers are “closet writers” –  I know this because you tell me so with your “I wish I had the courage to do what you do” emails – so I’m going to describe a little bit about the process. (And for those of you who are not writers, I’ll try to keep it short so I don’t bore you to tears.  Or, if you want, you can skip this part.  You’re not going to hurt my feelings, I promise.)

First, I perused the Chicken Soup for the Soul webpage and found the “submit your story” link in a column on the left (which I’ll post at the bottom of this blog for you closet writers I referred to earlier…you know you wanna!).  When you click here, it will give you a list of some possible upcoming book topics.  You then submit your story based on one of these topics.  The story has to be nonfiction – it has to be something that happened to you or someone you know – and can’t be made up.  You actually have to sign a release form later swearing to the truth of what is contained in the story.  The submission is entirely electronic – you just copy and paste the story on to their site and fill in some info about yourself – and Voilà!  You’re done.  It’s that simple.  (And it’s free!)  And then what happens next?

If your story isn’t chosen, you just don’t hear anything at all.  I’ve read that they can get thousands of entries on each individual topic. (Holy cow!)  And I’ve also read that it can sometimes take up to FOUR YEARS to hear back from them even if your story is chosen, depending upon when the production date is scheduled for that particular book.  So, if your story is chosen among the entries, you get an email from them letting you know.  (And that email gives you a small little heart attack and makes you cry…or so I’ve heard…) Then, you go on to provide them a small bio about yourself and sign release and waiver forms with regard to your material being printed in the book.

This is the step that I’m at now.  I have just sent in all of my legal forms and wrote a short bio about who I am (50 words or less – that was hard!) to be printed in the book if my story makes the final cut.  According to the assistant publisher (who I’ve spoken with by phone and email a few times at this point), the “vast majority” (her words) of the stories that have made it this far will be printed in the book.  However, if you’re familiar with the Chicken Soup books, you know that each book is divided into different sub-topics.  She explained that sometimes one sub-topic will be “too full” so to speak, and they may have to leave some stories out to keep it balanced.

So…it’s not 100% for sure that I’m in just yet – but I sure am starting to get my hopes up!  Keep your fingers crossed for me!  (And toes and eyes and whatever else you got…)

When (if?) I’m chosen to appear in the book, the next step will be that I will receive a printed copy of my story to proofread and edit if necessary.  Once the editing process is complete, and the book is bound, I will receive ten copies to keep, which I will receive prior to its release date of December 24.  One month after publishing, I’ll receive $200 payment for my story.

I mean, the money is cool and all, but at this point – who the heck cares!?  I’m soooo close to having my work published in a national best-selling book.  Oh. My. Gosh.  As my daughter said when she heard the news, “I don’t understand why they pay you.  Shouldn’t you be paying them?”

So, for the next few months, I am probably going to be a nervous wreck.  This could be such a huge deal for me.  This is big, folks.

But you know what?  I think that even if I am one of the unlucky few that have made it this far and yet don’t quite make it into the book in the end – I think it’s still pretty big, regardless.  Out of hundreds, maybe thousands, of submissions, my story was chosen.  Wow.  I’m honored, humbled, and blown away that this is happening to me.  And I have each and every one of you who are reading this right now to thank.  Because of you taking the time to read this blog and giving me your positive feedback over the months that I’ve been baring my soul for all the world to see, I have gained confidence.  I have started to believe that I’m actually a writer.  And because of that belief – I have taken a chance.  And it may possibly have paid off.

“If you wish to be a writer, write.”
– Epictetus