This is the back of the shirt that my son and I got at a 5k race we ran in this morning in honor of Leigh Cooper Wallace, a local hero who passed away a few months ago from complications resulting from pneumonia.  As the race director described it, this was a race “in memory of her compassion and generosity, her service to this community, her incredible strength, her support of young athletes, and her encouragement for all people to pursue a healthy lifestyle.”  They put together this first annual race to honor the “incredible example she set, so that we may continue to live life as fully as she did.”

I didn’t have the pleasure of knowing Leigh Cooper Wallace personally, but I can’t help but be influenced by the example she set.  She went through a lot in her short lifetime (most notably being that she was a kidnap/rape survivor), and she used her story to teach others to become fighters – to not let circumstances defeat you, no matter how tempting it might be to give up.

I couldn’t help but be aware of the timing of this race for me personally.

Although I am doing great and getting tougher every day, I do still have my moments.  I’ve had a rough couple of months.  I’ve lost more than one friend to various circumstances, including my very best friend who I miss every single day, and that’s not something that is very easy to bounce back from.  But I’ve been trying.  And as part of the trying, I’ve been pushing myself harder with my running.  If you’re not a runner, it’s hard to explain to you what running does to you.  I know there’s something chemical to it – endorphins and whatnot.  But it’s more than that.  So much more.  It’s a way to measure your ability to endure.  To teach yourself not to give up just because things start getting a little tough – but to push through.  Push through.  Even when you think you can’t keep going, you can.  Yes, there are going to be tough spots and yes, you may have to allow yourself to slow down a little to make it.  But you will make it. Push through.  Endure. Stay strong.

So, not only did I proudly run today with those thoughts in my mind, but I managed to achieve my own personal record.  I’m not a fast runner, by any stretch of the imagination, but I was a lot faster today than the old me ever was.  I managed to fall under the 30-minute mark and ran the race in 29:42.  It has been my goal for a very long time to break 30 minutes and I did it today – on one of of the toughest 5k courses I’ve ever run.

So, how about that?  Here I am.  My first race in this “new life” and I’m starting off with a bang.

Turns out I really am stronger than I think.   Thank you for the reminder, Leigh.

“As I get older I see that running has changed for me.  What used to be about burning calories is now more about burning up what is false.  Lies I used to tell myself about who I was and what I could do, friendships that cannot withstand hills or miles, the approval I no longer need to seek and solidarity that cannot bear silence.  I run to burn up what I don’t need and ignite what I do.”
~ Kristin Armstrong 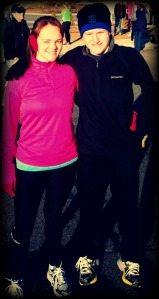 *Note: Here’s a link if you’d like to read more about what an amazing woman Leigh Cooper Wallace was: